Top interesting things to do in Ho Chi Minh City

Top interesting things to do in Ho Chi Minh City

Ho Chi Minh City is one of the most attractive city all over the world. There are many interesting places and activities for the visitors to explore it. In case of having some days to visit it, the visitors can consider the following things to explore this great city.

The Cu Chi Tunnel complex is actually part of a larger tunneling network that runs almost throughout complete Vietnam. In these tunnels, Vietcong moved and lived right under the nose of the American army during the war.

The War Remnants Museum in Ho Chi Minh City is focused mainly on the Vietnam War, but also on the war of French Indochina. The collection of the museum consists of many vehicles, objects and images of the Vietnam War.

Notre-Dame Cathedral of Saigon is one of the architectural highlights of Ho Chi Minh City. Saigon used to be called the Paris of the East, but unfortunately many of the old French buildings were lost in the war. 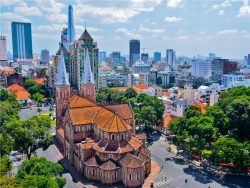 If you walk through the streets of Ho Chi Minh City, it seems that you can eat at every corner of the city. Street food is not a marketing term here, but just a part of daily life.

Bui Vien street it is bursting with bars, restaurants and sellers. If you want to spend a good night out and want to party with other travelers then this is the place to be.

The Reunification palace (independence palace) is the palace where the South Vietnamese president lived. It is also the place where the Vietnam-America war ended on April 30, 1975, when a tank drove through the gate. Nowadays, it is a museum.

The Bitexco Financial Tower is at 265.5 meters Ho Chi Minh City’s highest building and Vietnam’s third tallest building. A striking feature of the building is the helicopter platform that extends 22 meters from the building on the 52nd floor and the Skydeck. 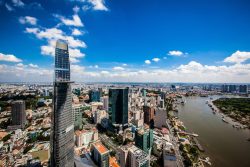 Opposite the Cathedral of Saigon (Notre Dame) stands the beautiful Central Post Office in colonial style. In the hall is a huge map of Indo-China and a giant portrait of Ho Chi Minh. The interior is more like a train station.

If you love shopping, then this is definitely one of the top things to do in Saigon. Here you will find many markets and department stores. Especially, Ben Thanh Market is the most famous market where you can buy a various stuffs and souvenirs, besides its local food.

Cholon is rich in a lot of beautiful pagodas, old shops and the famous Binh Tay market. Furthermore you will discover many lanes and commercial streets that make Cho Lon such a vibrant neighborhood.