How will the property market of HCMC be in 2018?

How will the property market of HCMC be in 2018?

The property market will continue to grow this year, the HCM City Real Estate Association (HoREA) predicts. In a forecast it has sent to the Government, HoREA said one- and two-bedroom apartments price at below 1 billion VND (43,800 USD) would be the best-selling segment and have the highest liquidity.

“The social housing segment will further develop while there will be a restructure of the high-end segment to meet market demand,” it said. “Condotels and land plots in housing projects will continue to be in great demand. Disputes over apartment buildings will be more knotty and need to be resolved in a timely manner.” Le Hoang Chau, chairman of HoREA, said the city real estate market would expand this year to neighboring regions. Investors, both domestic and foreign, would strengthen co-operation, he said. The market will develop more steadily with online trading becoming more popular and more green constructions that are environment-friendly becoming trendy. 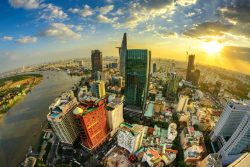 The association said there would be a raft of mergers and acquisitions this year, boosting construction activities in the city. Foreign direct investment would remain the main source of funding for the market. There is no threat of a bubble this year thanks to timely action by the Government. Furthermore, developers too have made efforts to tweak their investment so that they develop products that match the actual demand in the market. Buyers are becoming smarter and understand the market clearly.

In a report it released two days ago, global property consultant CBRE said, “In 2018 the mid-level segment will continue to account for the biggest proportion of the market, while the high-end and luxury segments will observe more considerate new supply, helping the market develop more sustainably.

The east and south will continue to be the hotspots of the market, with more new launches in districts 2, 7, 8, Binh Thanh such as One Verandah, GEM Riverside, Midtown, High Intela, Green Field. The average selling price in 2018 is expected to increase by 3 percent, with high-end and luxury segment showing an increase of 5 percent, and the mid-level and affordable segments increasing at a lower rate of 1.5 percent. The association said in 2017 the real estate market grew at over 4 percent. The medium and low-end segments saw high demand and accounted for 74 percent of the market, adding that FDI was at record levels.