Suspended ventures due to lack of ­administrative procedures are instigating a severe shortage of supply and sharp increase of prices of the property market in Ho Chi Minh City, as well as in outskirt areas. 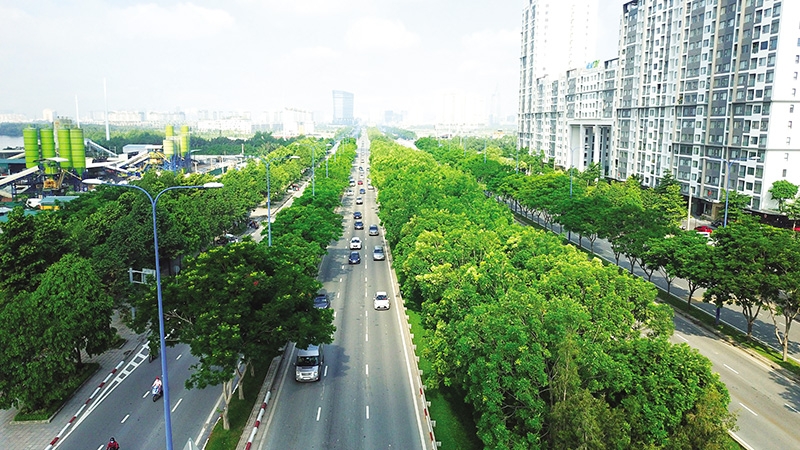 Ho Chi Minh City is currently far from a dream destination for many young couples as accommodation continues to increase in cost.

One such couple from the central province of Thanh Hoa, Mai Anh and Nguyen Manh, have had to ditch their plan to buy an apartment to resettle. Instead, they continue to lease a small flat in District 4 at a rental of VND5 million ($215) per month.

“We have saved around VND600 million ($26,000) after four years of living in Ho Chi Minh City and wanted to buy a small flat in the outskirts, which were selling at VND1.2 billion ($52,000),” Manh said. “However due to the shortage of supply, what we were looking for increased to more than VND1.6 billion ($70,000) and much over our budget. Thus we have to temporary halt our plans and save more.”

According to property consultants, the price of land in outskirt areas of Ho Chi Minh City has increased from 20 to 60 per cent compared to those even at the beginning of the year. The increasing prices are freezing the entire market, as real users cannot buy homes and sellers and speculators cannot seek out potential buyers.

Just like District 12, which inherited an improved transport system, District 9 has reported increases of both land and apartment units. Containing many high-rise apartments, a 70sq.m unit is now sold at VND2.5 billion ($108,750), around VND500 million ($21,700) higher than a year ago.

According to the recent figures from the Ho Chi Minh City Real Estate Association (HoREA), the supply of houses and units in Ho Chi Minh City has seen a shortage because many projects have been suspended due to entering complex administrative procedures before developers can launch them for sale.

The most hunted units in the market now are Grade C, which more buyers can afford. However due to the suspended initiatives, even Grade C units have been falling in number. In 2016, Grade C units occupied 30 per cent of the total market, while last year it was just 17 per cent. Even more seriously, no new Grade C project has been launched in the first half of 2019.

According to Ho Chi Minh City Department of Construction, after reaching a five-year high of 83 projects in 2017, the number had dwindled to 59 last year. In the first nine months of 2019, only 12 housing projects across all grades received approval in Ho Chi Minh City, a 72 per cent on-year decline.

The declining supply has been partly due to conflicting provisions in the various laws regulating the sector. Such issues have hit construction firms and equipment suppliers hard, while construction workers are facing lack of work.

Meanwhile Dang Hung Vo, former Deputy Minister of the Ministry of Natural Resources and Environment, said that supply of housing launched to the market from the second half of 2018 to September this year was almost zero, except for very few ventures which had completed necessary procedures previously.

“With increasing demand and limited supply, the price hike is understandable and this situation is not good for the market at all,” Vo warned.

According to Lam Pham, CEO at DKRA Vietnam, Vietnam is in a “golden period” of population, with more than 96 million people, including 36 per cent of people at less than 35 years old.

“Through our figures we see that in the last 10 years, the proportion of young home-owners under 35 years old has been increasing and is currently at 23 per cent,” Lam said.

“House prices have been increasing faster than the average income, meaning the dream of owning a house in this city is becoming tougher. It is even hard for young people on a strong salary of tens of millions of VND per month to buy a small flat,” said Lam.

The Ho Chi Minh City population is increasing on average by one million every five years. However, in the last five years, housing prices have increased by up to 60 per cent.

To overcome the current freeze in the market, developers are actively collaborating with the Ministry of Construction to ensure guidelines on completing procedures and pushing projects forward.

Ho Chi Minh City has ordered a team to review all 130 suspended projects and accept some of those for continuation as soon as possible.

Ngo Quang Phuc, general director of Phu Dong Group, said that in order to break through the current situation, the government should map out special areas to develop affordable housing, especially for young people who are in high need of accommodation. “Limited supply while demand is very high causes many complicated issues which could impact the whole economy, not just the real estate market,” said Phuc.

Meanwhile Pham of DKRA said that in order to control price hikes, it is necessary to impose more tax on second homes, and tax unused land. (source: vir.com.vn)