TOP 5 RESTAURANTS TO EAT THE AUTHENTIC PHO IN SAI GON

TOP 5 RESTAURANTS TO EAT THE AUTHENTIC PHO IN SAI GON

Pho, also known as Vietnamese noodle soup, is a traditional dish that represents Vietnamese cuisine and become a ubiquitious part of Vietnam’s rich culinary experience. Once you visit Vietnam, you should not miss this dish !

The two main types of Pho in Saigon are Northern Pho (which mostly follows Hanoi’s recipe, brought to Saigon by immigrants from the North) and Southern Pho (which has been adapted to fit Southern peoples’ tastes).

Traditionally, mornings are considered as a special time for having a bowl of Pho. But these day, no matter what time of day or night and due to its versatility and popularity, you can increasingly find countless vendors and food stalls serving this dish along the street and even in the commercial buildings.

The problem is finding the traditionally authentic Pho in Ho Chi Minh city can be a real challenge, so our guide below will be very useful as we’ll show you 10 restaurants that warrant visits from both natives and tourists alike.

Speaking of the unique Nothern style flavor, Pho Dau – a 55-yearl-old restaurant – is the best place that you can’t miss. Coming to Pho Dau, you will have a chance to taste the original recipe of Hanoian style at the heart of Sai Gon, with lots of beef, no sprouts and herbs or black sauce like the Southern style and they use glutamate (a familiar spice of Northern families) for seasoning instead of sugar. Up to now, Pho Dau is served without vegetables, black soy been paste and beef ball but still attracts many customers. Morover, each bowl of pho here still captures the traditional flavor that cannot be found anywhere else. 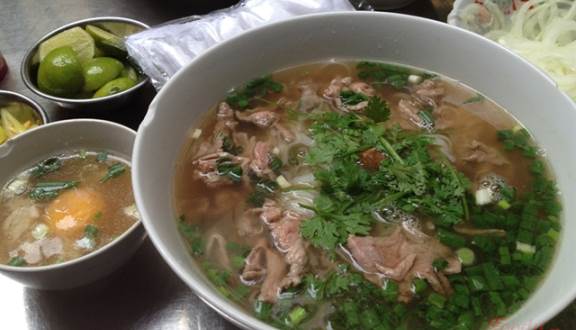 However, Pho Dau is only open in the morning and it is full of customers almost all times, especialy during the weekend. 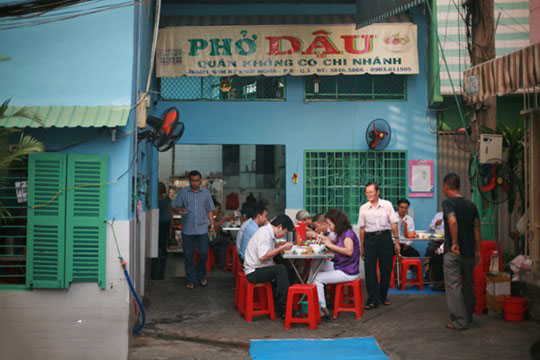 If Pho Dau is the most known Northen noodle amongst locals, then Pho Hoa is probably the most popular place serving Souththern style Pho, with lots of noodles, herbs and sprouts, sweet broth, and a bowl of Chinese cruller served as a side dish.

Pho Hoa became even more well-known since it was listed as one the best places to eat in most Ho Chi Minh travel guide books and recommned on many travel forums or blogs.

What makes this restaurant the best pho in Sai Gon is because the bowl size at Pho Hoa is big and full of Pho noodle that keep you you full for the whole morning. One more special thing about Pho Hoa is its prime location on Pasteur street which used to be considered as “The street of Pho”. 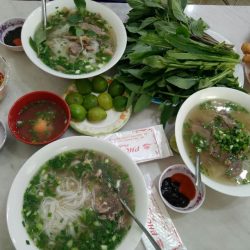 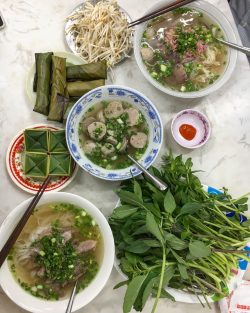 The over 60-year-old-restaurant couldn’t be miss in the list of the best Pho in Ho Chi Minh city. The owner is Mr.Tran Van Phon, who is 90 years old, runs the whole business, is also famous for telling patrons about his precious memories of the rise and fall of Saigon. And even until now, it is still enchanting natives and foreigners with its specialties: lots of beef, crystal clear broth. 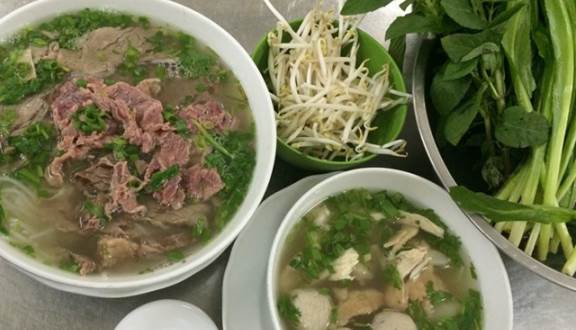 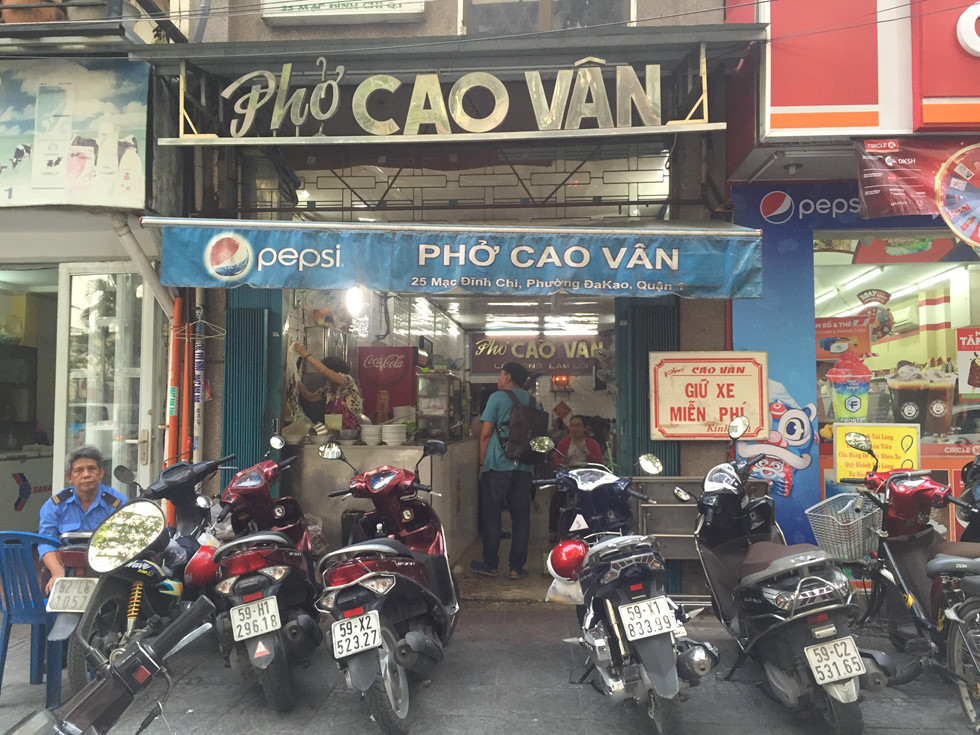 Also located on Pasteur street, the atmosphere of Pho Minh is totally different from that of Pho Hoa. Although staying humble in the a small alley which escapes the hustle and bustle city, Pho Minh has had a long career, operating for more than 60 years. It’s spacious with old tables and chairs reminding people of the old Sai Gon of 60 years ago. 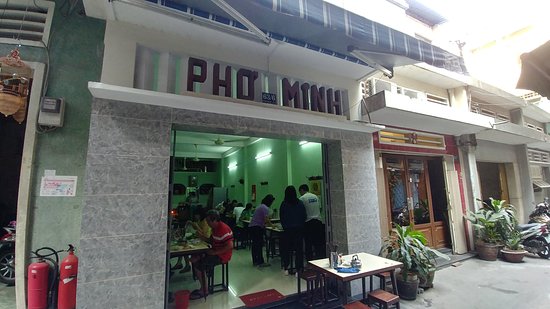 Pho Minh offers its customers Northern style Pho which is served in 5 ways: eye round steaks, well done steaks, flank, tendon, or tripe. The broth is not given too much spice but simply made with ginger and grilled dry onion. 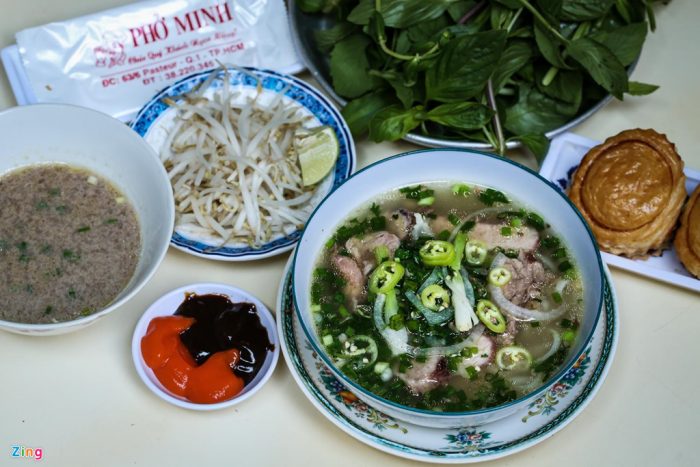 What’s better than having the feeling of living in a corner without any disturbance while enjoying a hot bowl of pho with an irresistibly charming fragrance? Elders come there to go back in time and others come to try the original taste of Pho at this shop.

Opened in 1954, Pho Tau Bay is not only one of the oldest and most famous Pho in Saigon but also represents the beauty of Vietnamese culinary culture and the symbol of the wholehearted chef. Pho Tau Bay restaurant was originally named as Pho Nhan (after the owner’s name), however, Mr.Nhan was alway wearing a pilots hat back then, hence, people called him Tau bay (airplane) to refer to his hat. As time has gone by, people started to call the restaurant Pho Tau Bay and it’s now even more popular than the original name. 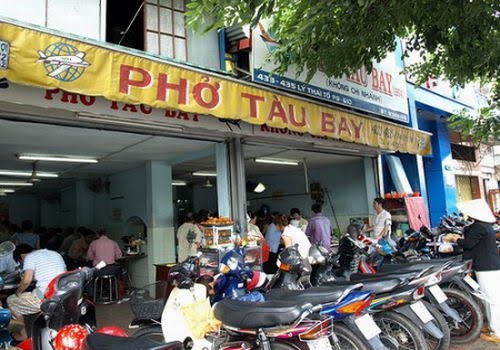 The traditonal Northern-style Pho isn’t served with bean sprouts and thick sweet soy sauce, but to accompany the taste of South customers, they now also serve herbs in Southern-style Pho. Two things that shouldn’t be missed to talk about Phở Tàu Bay are ceramic spoon and fat sauce. It has been said that it’s tastier to eat Pho with ceramic spoon. 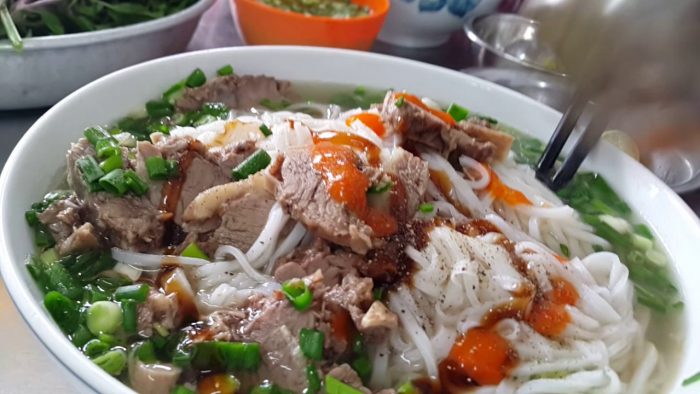 Apartment prices in HCMC have risen by more 50 percent across all segments since 2015, real estate firm DKRA said. 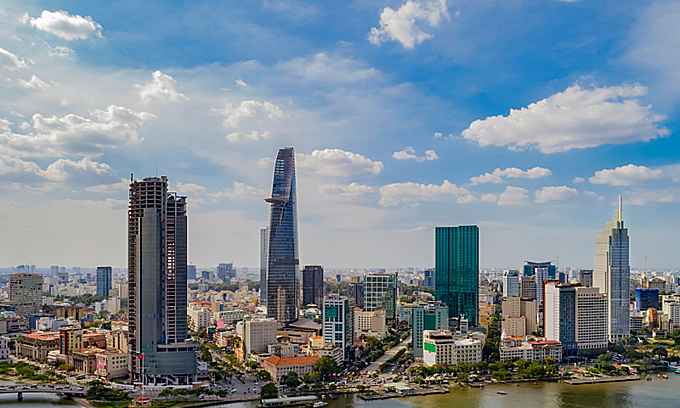 Prices are expected to keep rising due to a short supply since projects are taking a lot of time to complete legal procedures even as demand remains strong given the high net migration to the city, DKRA said.

According to real estate firm Savills, total supply, which includes unsold units and newly built units in the city in the last quarter of 2018, fell 44 percent year-on-year.

According to the city Department of Statistics, Saigon’s base population at the end of 2018 was 8.85 million people.