Vietnam’s hotel and resort market must make changes to develop

Vietnam’s hotel and resort market must make changes to develop

Vietnam’s hotel and resort real estate needs to have a comprehensive plan to ensure its development is on the right track. According to Mauro Gasparotti, director of Savills Hotels Asia Pacific, the hotel and resort property market of Vietnam was growing, driven by strong increase in the number of foreign tourist arrivals in recent years. 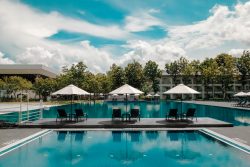 Recent updates of the Vietnam National Administration of Tourism showed that the country received 11 million foreign tourists so far this year, representing a rise of 27.8 percent over the same period last year. The increase was thanks to the launch of a number of international flight routes, together with easier visa policies. Hotel occupancy rates saw a significant increase in major tourism cities such as Hanoi, Ho Chi Minh City, Da Nang and Nha Trang, according to Savills Hotels.

However, a majority of the hotel rooms were located in coastal areas while condotel count outnumbered resort rooms, Gasparotti said, warning that this would lead to serious competition in hotel room prices. He said several developers did not pay adequate attention to the planning of their projects, adding that some focused simply on building their hotel projects with as many rooms as possible without giving thought to how to increase the added value of their projects. It was critical for the hotel and resort real estate segment of Vietnam to have a comprehensive plan to ensure long-term sustainable growth, he said.

Vo Kim Trang from Savills Hotels also said developers needed to have a long-term vision. “Developers will need to know tourism trends and changes in tourist demand, which will affect the development of hotel and resort products in the medium and long terms, rather than just focus on revenue in the short-term.” Savills Hotels also pointed out that Vietnam lacked diversification in products compared with destinations such as Thailand and Indonesia. The global market was currently witnessing new kinds of developments, such as resort wellness, resort spa, co-working hub and hi-tech hotel.

Morris Sim from Next Story Group, a hospitality management, marketing, design, franchising, investment and development company headquartered in Singapore, said developers in Vietnam should diversify their hotel and resort products to meet the increasingly diversified demand of tourists. Sim also said the sharing economy and social marketing were significantly affecting the hotel and resort property market with a new technology-savvy generation showing a new trend for working and traveling. Next Story Group said hotels and resorts must make changes to maintain and improve competitiveness.